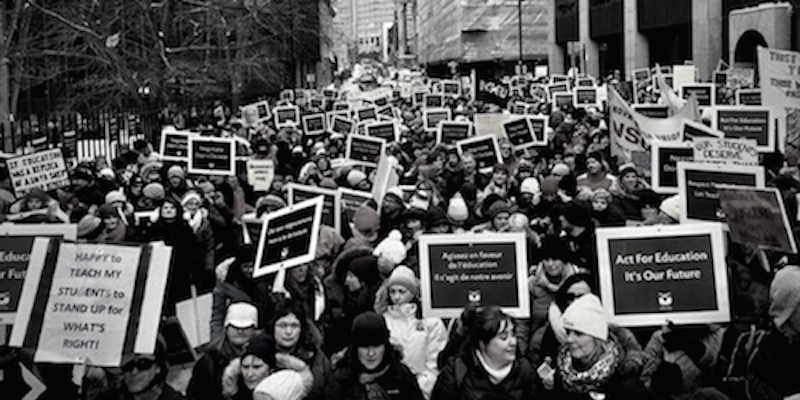 CUPE Nova Scotia President Nan McFadgen wants the McNeil Government to know they have created an unnecessary crisis in labour negotiations in the province. “Collective bargaining works if all parties respect the process. Our members are at bargaining tables every day, working to find solutions,” says McFadgen. “The McNeil Government, on the other hand, is attacking the hard-earned constitutional rights of workers.”

It’s important for the public to know that these attacks not only affect teachers. They also affect more than 75,000 public service employees across the province, including CUPE members who work in education, acute care, long term care, home care, and more.

“February 21st was a dark day for labour relations in Nova Scotia. By passing Bill 75, the Premier has created an atmosphere of extreme mistrust between union members and their government,” says McFadgen.

CUPE believes Bill 75 is also potentially harmful to students and workers in the Nova Scotia education system. Inclusion in our schools is important and should be looked at to find best practices and ways to improve the system. However, CUPE members who perform this work daily, are not considered under the Inclusion Committee created through Bill 75.

“A large part of the inclusion program is working with students with special needs. This work is performed by dedicated CUPE members who are educational program assistants and teacher assistants,” says Grant Dart, CUPE school board coordinator.

“CUPE members are frustrated by the Premier’s refusal to recognize the value of the jobs education workers do, including members who work in all support staff classifications within schools. CUPE members are the workers that keep the entire system working,” says Dart.

“We believe the McNeil Government’s attacks on workers’ constitutional rights will reflect poorly for the Liberals in the next provincial election,” adds McFadgen.