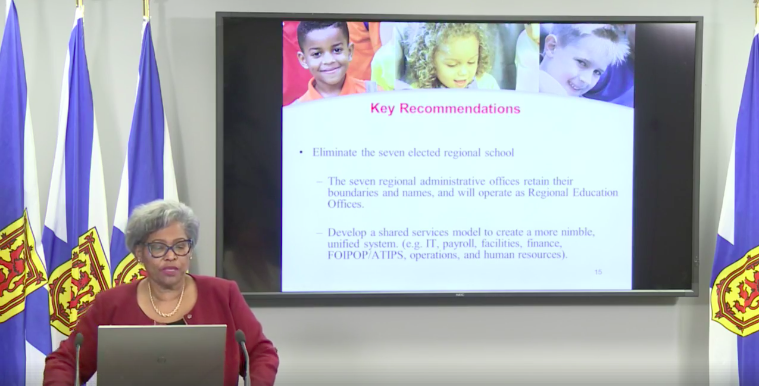 CUPE representatives are dismayed that recommendations for the province’s education system, by Dr. Avis Glaze, will see the McNeil Liberal government repeat the mistakes they made in health care.

“We are not surprised that the McNeil Liberal government’s commissioned report falls in line with the Liberal Party’s motion at their 2016 AGM to create two provincial school boards,” says CUPE Nova Scotia President Nan McFadgen.

“However, from our perspective this recommendation is not one that will achieve a better education system for the Province of Nova Scotia,” says McFadgen.

“We think it’s a mistake to move to a two-board system. We look back to 2014 and the acute care sector amalgamation established by the Health Authorities Act,” continues McFadgen. “The Liberal’s ‘super board’ has not worked.”

“It was supposed to achieve efficiencies and stream lined processes, and therefore, better health care, accessible to everyone. The reality is communities across this province are suffering under the new health care structure,” says McFadgen.

“To the contrary it created labour unrest and has done nothing to improve health care. If anything, our wait times and physician shortages have become a more serious problem under the new system,” says McFadgen.

“CUPE feels that our children in this province are too important to repeat the same mistake in the education system,” says Grant Dart, CUPE School Board Coordinator.

“CUPE continues to be a strong supporter of the local school board structure,” says Dart. “These board members are elected from the communities they represent and know best the needs of the communities, students and their families.”

Read the full report at ednet.ns.ca/adminreview.