Special constables at the Cape Breton Regional Police Lock-up will hold an information picket at the Sydney Civic Centre on the Esplanade from 12-1 pm and from 4-5 pm today, Thursday. They will hold information pickets again tomorrow, Friday, in front of the police station on Grand Lake Road at the same times, 12-1 pm and 4-5 pm.

The eight special constables are members of the Canadian Union of Public Employees Local 933. They are asking their employer, the Cape Breton Regional Municipality, to address wage inequities between them and other special constables in the province who perform the same or similar work yet earn considerably higher wages.

“The low wages mean the workers are constantly understaffed and stressed,” says CUPE National Representative Tammy Martin. “The amount of overtime the employer pays in one year could easily bring their wages up to scale with other special constables.”

WHEN/WHERE:
Thursday, July 29 at the Sydney Civic Centre on the Esplanade
Friday, July 30 at the Police Station on Grand Lake Road

We can vote for a better Canada 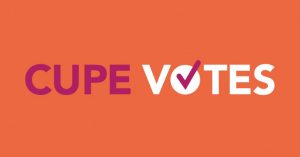