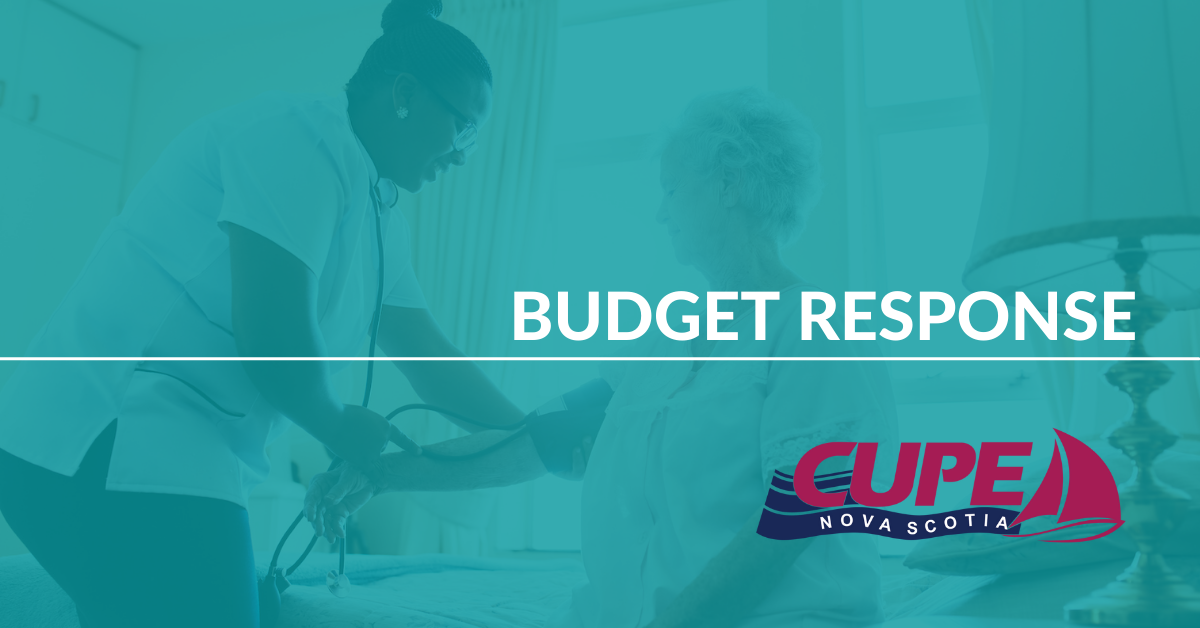 “In long-term care, the budget allocated funding for nursing (LPNs and RNS) to increase from 1 to 1.1 hours of care per resident per day (six minutes), and a marginal increase to the ‘hands-on care’ provided by continuing care assistants (CCAs),” says McFadgen.

“We want the public to understand that hands-on care and nursing are two separate types of work. The money in this budget will only add six minutes per day for each resident for nursing care. Meanwhile, hands-on care provided by CCAs will not increase at all in some nursing homes, and other facilities will see up to an additional 45 minutes per resident per day,” explains McFadgen.

“Yes, that’s an improvement for some residents, who receive 2.45 hours of hands-on care now, but that’s simply not enough,” says McFadgen, “especially considering all the work our members are tasked with. For example, bathing, toileting, feeding, hygiene care, medication, and time to interact on a personal level with each resident.”

CUPE is also troubled that government has not earmarked funds in the budget for wage adjustments for dietary and kitchen staff, laundry, maintenance, recreation and administrative staff who work in hospitals and nursing homes. “Patients and residents receive care and services that are provided by a team of staff. By not extending a wage adjustment to all job classifications, the province is not recognizing the value these workers provide,” says McFadgen.

“Also, the tuition support for CCAs in the budget is a good start to help with the recruitment crisis, but what will really attract more workers to the sector is to offer grants, which would help with living expenses for students as well, while attending school,” says McFadgen.

The budget did not provide for an increase in the things CUPE has been asking for on behalf of home support workers, where they are also facing a recruitment and retainment crisis. “There are a number of issues in the sector that require funding, such as guaranteed hours of work and scheduling,” says McFadgen.

In child care, CUPE hoped to see a commitment in the budget to increase compensation for early childhood educators no later than the start of the school year in September. “Will they have to wait until next year’s budget before they receive an increase? Knowing that funding from the federal government is there now makes the delay more frustrating. It simply isn’t fair that these workers, predominately women, who were not already included in government’s plan to roll out $10-a-day childcare,” says McFadgen.

There are four measures that government should implement at once, if we are expected to recruit and retain enough qualified staff to meet the commitments made to provide new spaces by September.

“We are now paying for decades of neglect in sectors of care work, and it’s going to take a lot more than what was in the budget to fix,” says McFadgen.