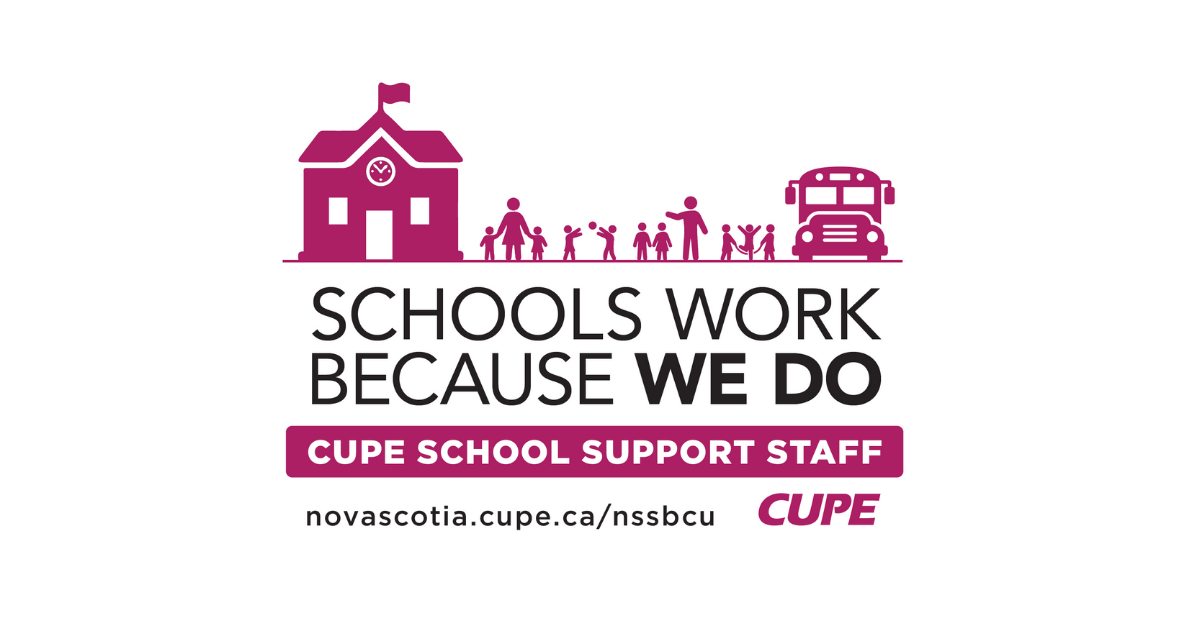 Member update on bargaining from the Nova Scotia School Board Council of Unions.

Your CUPE provincial bargaining team is made up of the presidents of eight locals and the CUPE education sector coordinator, and with the assistance of the CUPE Atlantic regional director. The employer’s provincial bargaining team is made up of a human resources representative from each of the eight Regional Centres of Education, as well as one government representative, and one legal counsel (who is also their chief spokesperson).

In January, the parties signed a “memorandum of conditions” for CUPE common table (provincial) bargaining. This agreement was signed by all seven Regional Centres for Education, the CSAP, and the eight CUPE locals. It is our commitment to bargaining certain items together as one, at the provincial level.

We agreed to negotiate health and safety, employment equity, professional development and training, and wages, among other things. Any items not agreed to can be addressed in “local” bargaining, but not both.

Following the initial dates in January to exchange proposals and establish the provincial table items, we bargained on two days in February and two days in early May. Talks are progressing slowly, but we are making progress.

Health and safety at work is a priority

Participation by CUPE members in our health and safety survey was excellent, and the results are helping strengthen our position at the table. Here’s what we learned from our members.

CUPE members continue to report they are experiencing workplace violence at an unacceptable rate.

24% of members reported being struck or hit frequently

Many CUPE members have expressed frustrations with barriers to reporting or lack of response from their employer if they did report. Here are some of the common themes we heard, in your own words:

“I do not feel we are protected in our schools.”

“I feel that the reports are just filed as nothing ever comes from them.”

“I’ve had handfuls of my hair ripped out of my head, and my clothing ripped.”

“We are told it is part of our jobs”

We are seeking solutions at the bargaining table that will clarify and expand on employers’ responsibilities to prevent workplace violence, and to provide the union with tools to hold them accountable when violence does occur.

Employers have a responsibility to ensure that workplaces are inclusive and free from discrimination. However, inequalities often exist because of years of hiring practices that have excluded certain groups, usually unintentionally. For example, an employer may require unnecessary educational qualifications for certain jobs which act as a barrier for people who have difficulty accessing higher education.

It’s important to ensure that our workplaces are open to everyone in our communities, including groups that have historically been marginalized in the labour market.

Our greatest strength comes when we move forward together

We need our locals to keep it up. It’s important that bargaining at our local tables keeps pace with what’s happening at the provincial bargaining table, so that we can pressure employers on local issues too.

NSSBCU members and CUPE staff are set to return to the provincial table with government representatives on July 4 and 5, and each of the eight locals will continue to bargain locally.

If you have any questions, please contact your local president for more information.