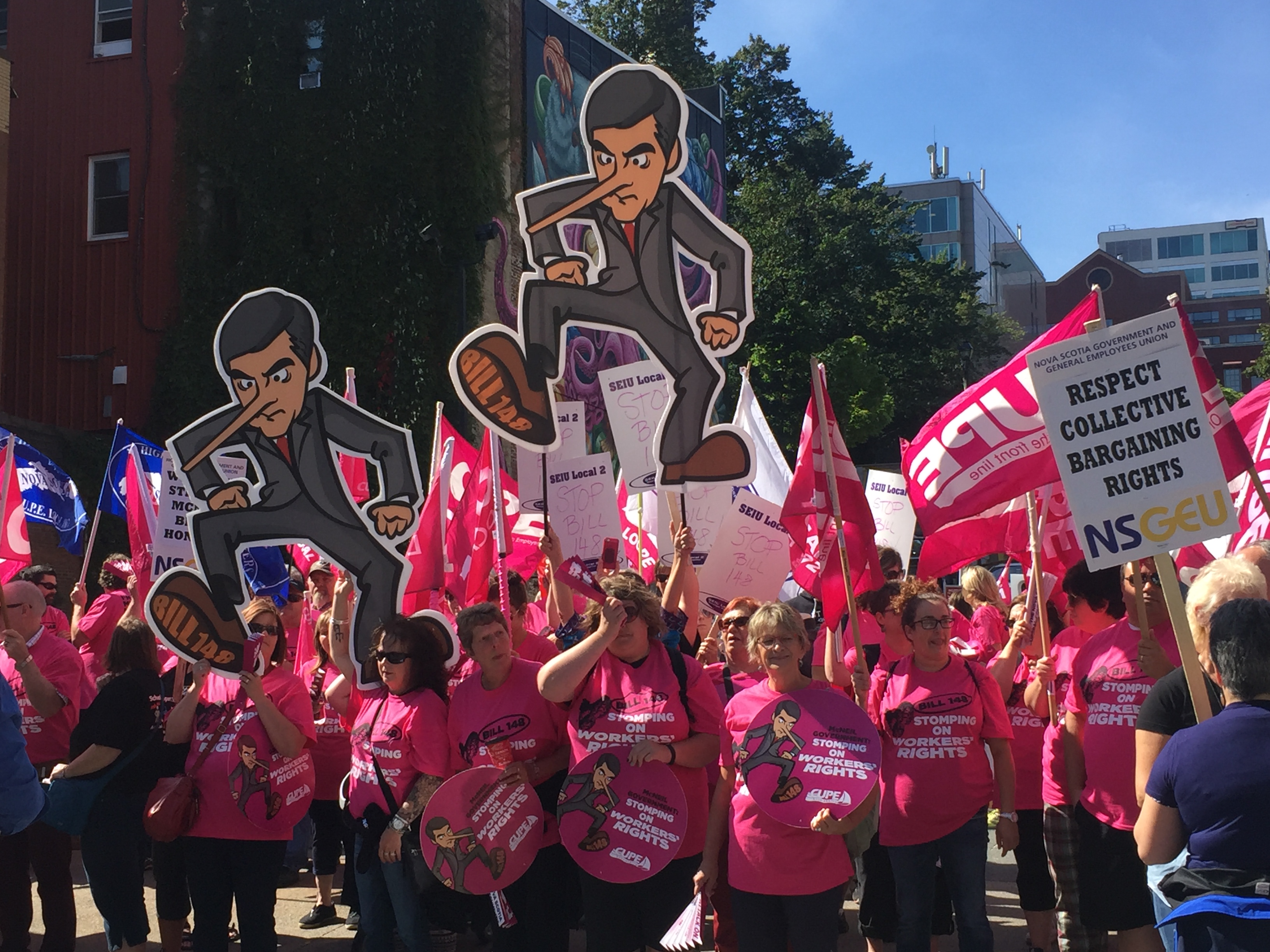 The following speech was given by CUPE Nova Scotia President Nan McFadgen at the Rally to Protest Bill 148 on September 21, 2017, at the Nova Scotia Legislature.

We care about the residents in our nursing homes.

We care about increasing the number of staff in hospitals, so we all receive quality health care.

We care about increasing the number of educational assistants in our schools, to help teach our children.

We care about the quality of all the public services we deliver.

We care about Nova Scotia.

The choices made by the Liberal Government are hurting the province we love and are proud to call home.

They are not acting in the best interest of working people like you or me.

They are putting their own interests – and the interests of corporations – ahead of workers and their families.

Nova Scotians are already feeling the strain of cuts to nursing homes and the underfunding of many of our key services – like our hospitals, schools and universities – to mention a few.

The Liberals have proclaimed legislation that allows them to impose contracts on public sector workers and mandates a wage freeze with a wage increase that equals a rollback.

These attacks on public sector workers are unfair and likely unconstitutional.

They’ll also do serious damage to the economy.

What’s at stake is not only security for the people who deliver public services, but also security for all Nova Scotians who rely on these services every day.

The wage freeze will increase stress and frustration among workers.

It will encourage young people and skilled workers to leave the province.

Stephen McNeil would have you believe that there are no alternatives.

We believe change is possible.

We can choose a Nova Scotia where we all have the chance for a better life.

With a government that shares our hopes – for security and well-being for our families.

The Liberal Government is for the wealthy and big corporations.

The government we want is for people like us.

The Liberals are focusing on their own agenda.

The government we want is focusing on making life better for all of us and our families.

The Liberals are cutting, privatizing and neglecting the services we count on.

The government we want should invest in strengthening services for families.

The Liberal Government should not have passed Bill 148 because they did not give contract negotiations a chance to work.

The Supreme Court has said all workers have the right to negotiate contracts without interference from laws like this one.

This legislation increases stress on workers, drives young people and skilled workers out of the province and hurts local economies.

These attacks as disrespectful and tough on families and will cause workers to fall further behind.

We don’t have to settle.

We can have a government that will face problems head on and fix the things that matter to us and our families.

Union members are fighting to deliver the services people count on and to grow our economy.

Better wages are necessary to get the economy growing and reduce inequality.

Keeping wages down is one of the worst things to do to our economy.

There are steps the Nova Scotia Government can take to put people first to protect the public services we need and create good jobs and a stronger economy.

Just to name a few.

This Liberal Government is stomping on workers’ rights and doing serious harm to our economy that will take many years to recover from.

This is not the province we want.

We want a government that shares our vision for a province – where we raise each other up.

It’s time to grow our economy – with decent wage increases – and a fairer share going to workers!