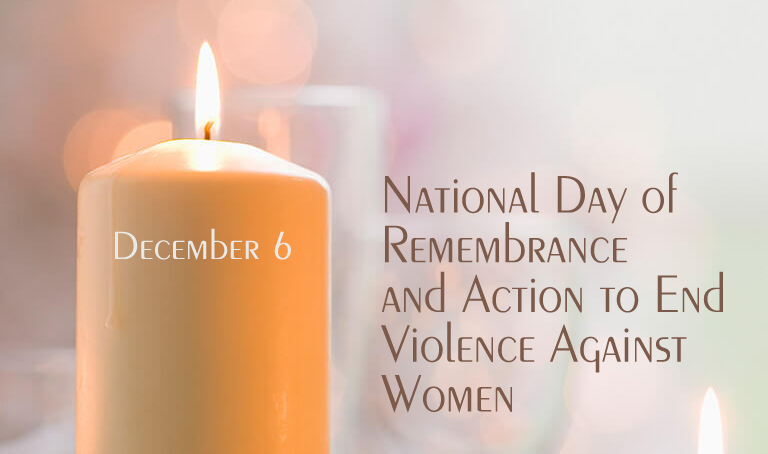 The National Day of Remembrance and Action on Violence Against Women is held every year on December 6, in commemoration of the 14 women murdered at L’École Polytechnique in Montreal on Dec. 6, 1989, an act of gendered violence.

Halifax
-December 6 begins at 5:15 pm at the Halifax Public Library on Spring Garden for the outside vigil – Afterwards we will go inside to Paula Reagan Hall where there will be speakers and a showing of movie Polytechnique and a closing.

Yarmouth
-5 pm in Frost Park (Storm location is Yarmouth Town Hall – Meet at the Yarmouth Town Hall and a candlelight vigil will proceed to the monument in Frost Park. A few words and songs to commemorate the national Day of Remembrance and Action on Violence Against Women. Organized by the South West Labour Group and Tri-Counties Women’s Centre.

Middleton
-7 pm vigil will be held at the Holy Trinity Anglican Church.

Stellarton
-10 am vigil to be held at the NSCC Pictou Campus gymnasium in Stellarton.

Acadia University
-Women’s & Gender Studies invite members of the Acadia University community and the community at large to the Annual December 6th Vigil to commemorate Canada’s National Day of Remembrance and Action on Violence against Women from 4:30 – 5:30 pm at the Wolfville Farmers Market, 24 Elm Avenue, Wolfville.

New Glasgow
-National Day of Remembrance and Action on Violence Against Women:
Not so Silent Vigil from 6:00 to 8:00 pm at 135 Provost St., New Glasgow (former Lolly’s location)
Join us for an evening of musical, literary and dramatic performances followed by an Open Mic. This event will speak about The issue of Violence Against Women and celebrate the many beautiful, brave and fabulous women in our lives.