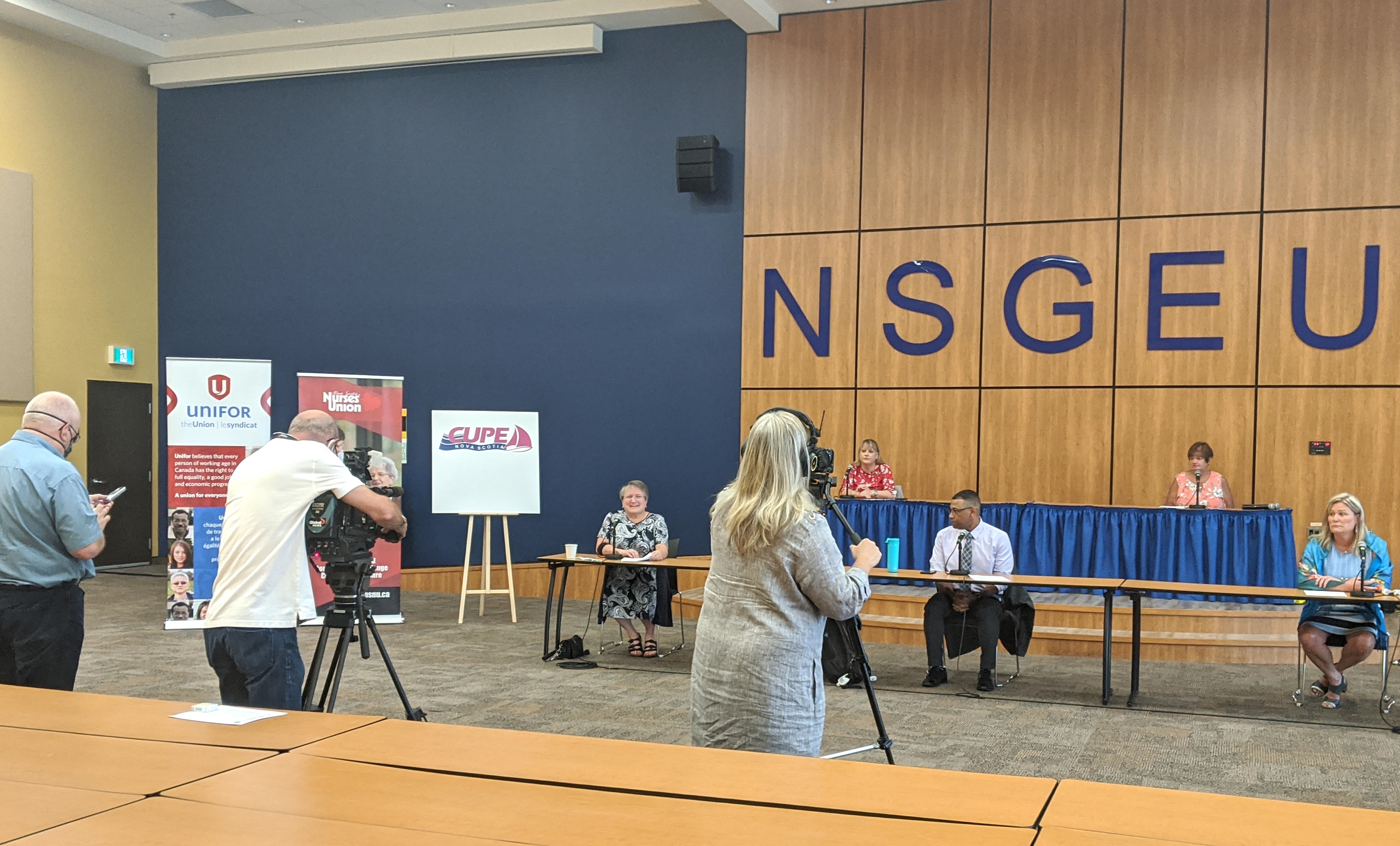 A news conference was held July 22, 2020, by the five presidents of health care unions in Nova Scotia (CUPE NS, NSGEU, NSNU, Unifor and SEIU). Please see the news release and video of the news conference below.

Close to 4,000 nurses across Nova Scotia say they’re tired of waiting for government and their employers to implement a pay increase they are owed.

Five unions representing licensed practical nurses (LPNs) are asking for immediate action and compensation for all LPNs, regardless of where they work, following the June 15th Consent Award granting a 12 per cent increase to LPNs represented by the Nova Scotia Government and General Employees Union (NSGEU) at the former Capital District Health Authority. The increase is retroactive to March 17, 2014.

The Consent Award was the culmination of a review process and subsequent grievance initiated by the NSGEU on the basis of the expanded scope of practice for LPNs employed by the former CDHA.

“I’ve been an LPN for 21 years and I can tell you that the scope of our work has changed dramatically. We started as nurses’ aides and now as nurses we are working everywhere from the emergency room, to the operating room, COVID clinics, we are charge nurses in long-term care… the list is endless,” says Nan McFadgen, president of CUPE Nova Scotia.

NSGEU argued that LPNs were doing work above their pay grade and deserved to be reclassified. Other health care unions made the same argument but, unlike the NSGEU, did not have mechanisms or language in their contracts to grieve job reclassification.

Jason MacLean, president of the NSGEU says that all LPNs, not just those who received the Consent Award have been waiting for too long to be properly recognized for their contributions to the health care system. Further delays in rectifying this imbalance would be unacceptable.

“It took six years and an arbitrator for us to resolve this matter. Asking thousands of nurses to wait potentially for many more years for equal pay sends a callous message,” says MacLean.

Janet Hazelton, president of the Nova Scotia Nurses’ Union, says grievances have been filed citing parity of wages as a fundamental principle of the wage table and that employers are essentially violating that principle by refusing to adjust the rates for all LPNs retroactive to 2014.

“We’ve filed grievances in all sectors, acute care, community care and long-term care, but feel government and employers should address the disparities immediately. The unions fought for and gained wage parity for all LPNs many years ago. This is an irrevocable setback if not dealt with now,” says Hazelton.

Unifor’s Atlantic Regional Director, Linda MacNeil, believes there’s been a demoralizing and polarizing effect on LPNs who are doing the same work from one end of the province to the other, but will now be paid significantly less than some of their colleagues. Delaying a resolution to the problem will further impede recruitment and retention efforts throughout Nova Scotia, particularly in rural areas.

“All five unions representing LPNs in Nova Scotia have mounted a joint a letter-writing and public awareness campaign to unify our members and gain support for nurses. Collectively, LPNs are feeling more and more undervalued and disrespected the longer this goes on,” says MacNeil.

“A second wave of COVID-19 could have a devastating impact on long term care as we’ve seen play out in other provinces and here at home. Paying nurses different wages to do the same work, especially during a pandemic, is a needless distraction. Our efforts and priorities should be on keeping everyone safe, not on the fundamental pursuit of equal wages for equal work.”

The unions recognize that all LPNs in Nova Scotia have seen an increase in their duties and responsibilities over time and hold an advanced role in patient care. It is time for government to acknowledge and appreciate our LPNs in all sectors of care by applying wage parity immediately.