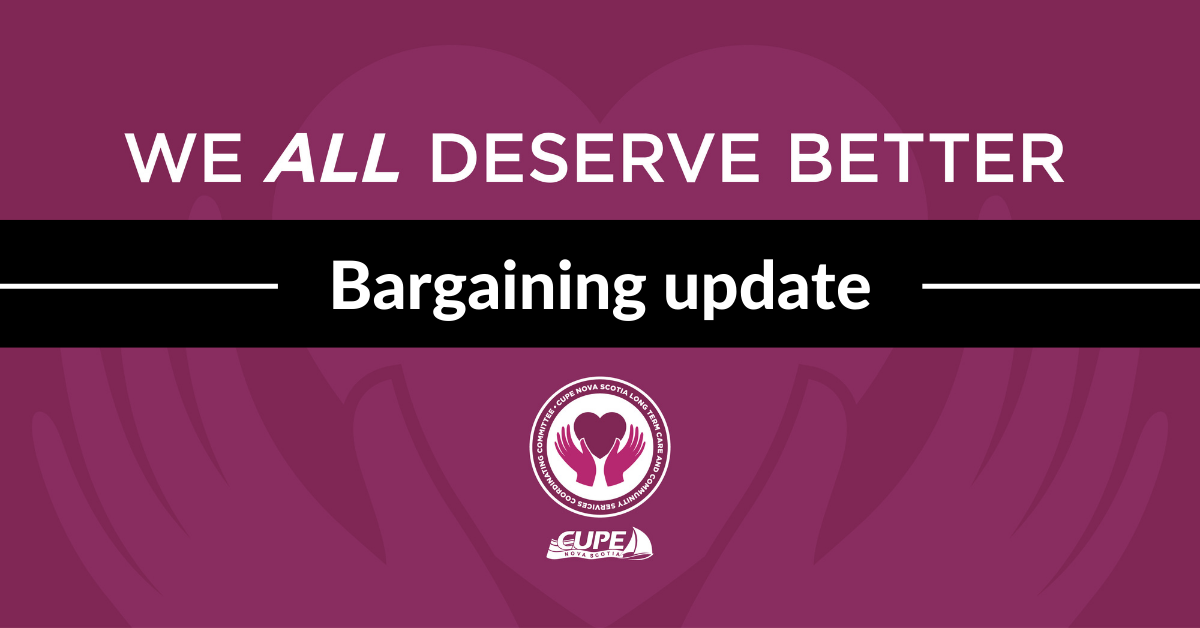 CUPE’s “lead table” bargaining committee met with the employer’s bargaining team on April 25 and 26, May 25, and June 28. A financial offer was tabled on May 25, which was a three-year term with a 1.5% increase each year, with an additional 1% on the last day of the contract, and an increase to shift and weekend premiums of 10 cents an hour each. No other financial proposals were addressed and there was no opportunity to discuss anything financial beyond the “mandate” given by government.

The offer was flatly rejected by your bargaining committee and the NS Labour Board was notified that we will need the assistance of a conciliation officer to continue bargaining. Dates for conciliation were set for June 28 and June 29.

On the morning of June 28, the employer’s team informed us that they had not received direction from the government to offer anything more. Your committee acknowledged that bargaining is at an impasse and the conciliation officer’s report to the Minister of Labour will be filed on July 8.

A well-deserved wage adjustment for CCAs was announced in February (that happened outside of the bargaining process). However, it left all other long term care workers feeling neglected, not respected, and not valued for the work they do.

Before and during the pandemic, responsibilities have increased for many support classifications. Workers in housekeeping, dietary and laundry are being trained and expected to assist more and more with resident care. They help with transfers, repositioning, ambulating, and feeding of residents, in addition to their traditional duties and responsibilities. All staff have continued to show up during the pandemic, enduring difficult conditions, because they care about the residents.

CUPE long term care locals held rallies across the province on June 27 to draw attention to the importance of all workers in the sector and to say that everyone deserves to be recognized and compensated more appropriately. In response, the Minister of Seniors and Long Term Care issued a statement on June 27. She acknowledged, “How deeply grateful Premier Houston and I are for everything you do to support Nova Scotians living in long-term care facilities. She also stated that, “You have earned our highest level of respect,” and, “This government believes in open and fair collective bargaining. The place to discuss terms and conditions of employment, including wages, is at the bargaining table.”

However, nothing the minister said has translated into the government having any meaningful negotiations with your bargaining committee. As CUPE NS President Nan McFadgen says, “You can’t pay with ‘respect’ at the gas station or grocery store.”

The failure to engage in any meaningful negotiations has increased the stress felt by our members. In addition to difficult working conditions and the soaring cost of inflation, morale is low, and the recruitment and retention crisis continues to get worse.

Given the government’s failure to engage in meaningful bargaining, your bargaining committee is calling on all long term care locals for their support. We must increase awareness and public attention on our bargaining by moving towards possible strike action. This is the last thing we wanted, but the government does not appear to be listening to us.

All CUPE long term care locals should work with their assigned CUPE staff representative to complete these steps (in order as follows):

CUPE members need to send a strong, clear message to the government that our concerns must be addressed. We all deserve better!

If you have any questions, please contact the committee chairperson or staff coordinator.