Opening of the 54th Division Convention

The 54th annual convention of the Nova Scotia Division of the Canadian Union of Public Employees opened tonight, Sunday, May 28, 2017.

There were 205 people attending, including 174 voting delegates and three alternates, according to the Credentials Committee.

Mi’kmaq singer and drummer Jared Gloade opened the evening with the Mi’kmaq Honour Song (see call-out below for the translated words) and welcomed CUPE members to unceded Mi’kmaq territory. 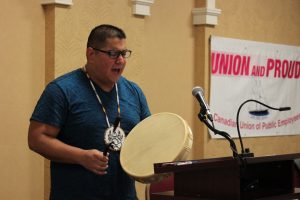 Technical difficulties with the sound system gave delegates the opportunity to sing the national anthem in an impromptu choir; delegates sang it loud and proud.

Once seated, members shared the Equality Statement, Code of Conduct and were introduced to the CUPE Nova Scotia Executive Board, National Officers and members of CUPE’s National Executive Board. The Convention was officially called to order and members of committees gave their reports; all were adopted and official business ended. Members of equity-seeking groups held a caucus upon adjournment.

A lively introduction to the purpose of convention, its procedures, traditions and possibilities. 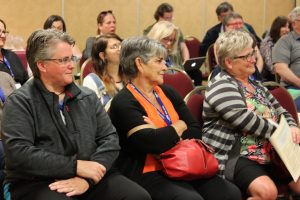 Specific aspects of parliamentary procedure were explained, including the voting process, tiling the doors, pro and con mics and the act of “calling the question.”

Points of privilege, points of order and other ways to manage the conversation in the room were also discussed. Interpretive dances were mentioned frequently.

Don’t be frightened of the procedure – it’s to keep the conversation moving efficiently and respectfully. Get up and say your piece at the mic. First timers’ mic get a prize – and a round of applause. Be brave – this is all about solidarity and having a voice.

Ombudspersons are on hand to hear from you in case you experience any incident or behaviour that runs contrary to CUPE’s Equality Statement and Code of Conduct. The phone number is on the back of your badges.

Check out the tables set up in the hallway – you’ll find information about health and safety, education, as well as various committees including pensions, women’s and social justice. Find out what else CUPE is about! 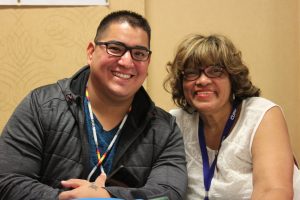 Quote of the night

“We still have to keep the torch burning folks, so we can light the way for the youth of today. So, within CUPE I say, united we stand, divided we fall. So, let’s unite!” Liz Paris, VP Equity