Fighting back against precarious work 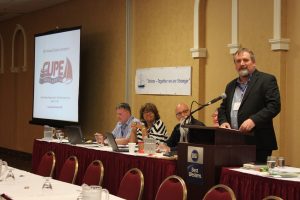 “We hear a lot about precarious work these days,” Hancock said. “It’s more than a buzz word. Everywhere I go I hear about the spread of precarious work and its impact on workers. It’s becoming the norm.”

“Across the country, governments have misplaced priorities. At the ground level, you know what that looks like – attacks on wages, benefits, pensions. Making full-time jobs into part time, short term, precarious.”

“The McNeil government is just not listening anymore,” Hancock said. “They are out of step with the needs of Nova Scotia families. We can do so much better than Stephen McNeil and the Liberals.” 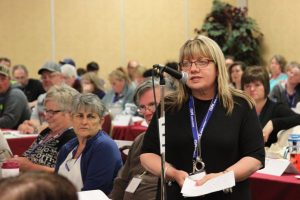 Delegated debated a range of issues and passed many resolutions on Monday, including support for public water, support for a higher provincial minimum wage and increased public awareness against domestic violence and intimate partner abuse, among other issues.

CUPE Nova Scotia’s Women’s Committee submitted the resolution on violence. Delegates told stories that underscored the urgency – and life or death nature – of the issue, and the need for our union to keep working to prevent violence and support its victims.

Delegates engaged in many thorough discussions today, including the need to increase the province’s minimum wage to $15/hour, a resolution submitted by CUPE Local 108. Delegates supported the call for the union to continue to participate in the Nova Scotia Needs a Raise Coalition. 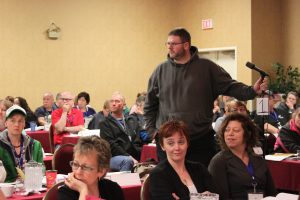 Not one step back 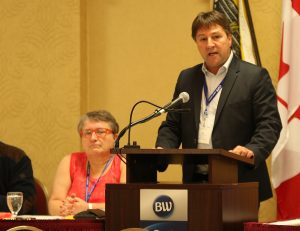 “That is not what our members and Nova Scotians deserve. Wherever things like these happen in Canada, we have to fight back,” Fleury said.

Fleury thanked the convention delegates for standing up for each other, for public services and for our communities. “When our members stand up in their workplaces and in their communities, nothing can stop them,” Fleury said.

“When CUPE members are fully engaged, when locals are fully prepared, we can fight back at the bargaining table. Because in CUPE, we bargain forward, not backward.”

“Our National Strike Fund is very healthy, with over ninety-five million dollars in the bank,” Fleury said. “This is dedicated money that can only be used for strike- related issues. We also made improvements to our Strike Fund regulations to help our members when they need us.”

In closing, Fleury encouraged locals to submit their Trustees’ Reports and he reminded delegates of the educational and training opportunities available to help union financial officers grow in their roles. 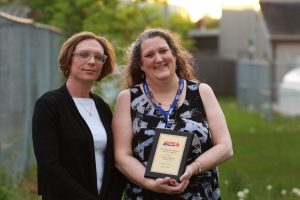